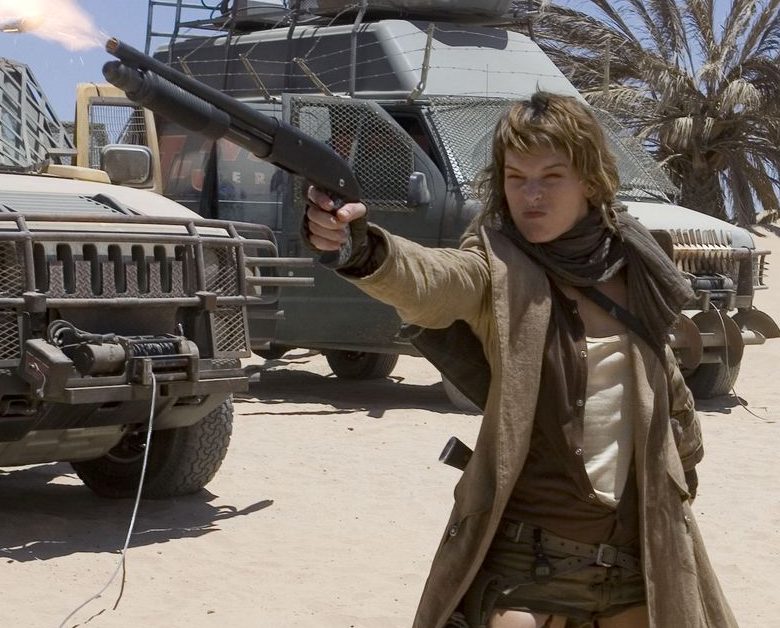 Is RESIDENT EVIL the most nihilistic big budget film franchise out there?

Every single entry is hard reboot on the series. No matter what Alice (Milla Jovovich) does it all goes to shit by the time the next one starts. There are no happy endings in RESIDENT EVIL.

Yet, beyond giving me the chance to make broad pseudo-profound theoretical statement, it makes for shitty ass storytelling. Remember how the gang were all together and ready to rebel at the end of the last one? Well, now the earth has been destroyed and they roam the wastelands. Sure, it’s fun to see the character from APOCALYPSE pop up in EXTINCTION, but do we really want them on screen to watch them die? Who are these new people that get to do nothing and then turn into zombie chow? Why can’t Paul W.S Anderson take a screen writing class? No one gets a moment to shine. They are simply there. For example, who is Claire in this movie?  I realize she’s named after major game character, but is that it?

Why should I care?

It’s a pretty inspired decision to get Russell Mulcahy to direct this one. He’s an interesting stylist that brings a different aesthetic to what has come before, but like all of his previous pictures, this one lacks any kind of cohesion. After a rousing opening fifteen minutes things shamble on, jumping from scene to scene, unsure of what story it wants to tell, and never defining any of the characters (not even in an archetypal way) so when they bite the dust (Oh no, not cowboy! Or the the guy that drives the bus) it rings hollow. There’s some fun gore, but the action is mechanic and is empty of stakes, so it wears thin. It’s not helped at all by an ending that’s rushed and dropped in from an entire different film.

Is this is how we’re ending this? Okay. I guess this is fine.

Even if it sounds like I’m resoundingly negative, I still found things to enjoy, but the entire film is so disconnected from any kind of propulsive narrative (internal to a set-piece or the entire running time) that it’s a tough to enjoy anything beyond the style that Russell Mulcahy brings to the proceedings.

Well, the next one is better, right?