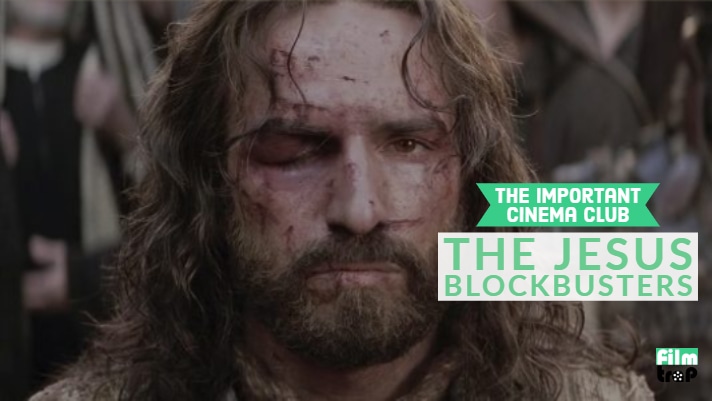 We explore the portrayals of J.C in THE GREATEST STORY EVER TOLD, THE PASSION OF CHRIST, THE GOSPEL ACCORDING TO ST. MATTHEW, LIFE OF BRIAN, THE LAST TEMPTATION OF CHRIST and many more.

Become a Patreon subscriber for $5 a month and get an exclusive episode every week! This week on our Patreon we discuss Kevin Smith’ DOGMA.

From his birth in Bethlehem to his death and eventual resurrection, the life of Jesus Christ (Max von Sydow) is given the all-star treatment in this epic retelling. Major aspects of Christ’s life are touched upon, including the execution of all the newborn males in Egypt by King Herod (Claude Rains) ; Christ’s baptism by John the Baptist (Charlton Heston) ; and the betrayal by Judas after the Last Supper that eventually leads to Christ’s crucifixion and miraculous return.

In this version of Christ’s crucifixion, based on the New Testament, Judas expedites the downfall of Jesus (Jim Caviezel) by handing him over to the Roman Empire’s handpicked officials. To the horror of his mother, Mary (Maia Morgenstern), Magdalen (Monica Bellucci), whom he saved from damnation, and his disciples, Jesus is condemned to death. He is tortured as he drags a crucifix to nearby Calvary, where he is nailed to the cross. He dies, but not before a last act of grace.

Pier Paolo Pasolini’s Biblical drama follows the life of Jesus Christ (Enrique Irazoqui) as depicted in the Gospel of Matthew from the New Testament. Much of the dialogue in the Italian film hews closely to the text, which focuses on the teachings of Jesus, including his parables, and on their revolutionary nature. As Jesus travels along the coast of the Sea of Galilee, he gradually gathers more followers, leading him into direct conflict with the authorities.