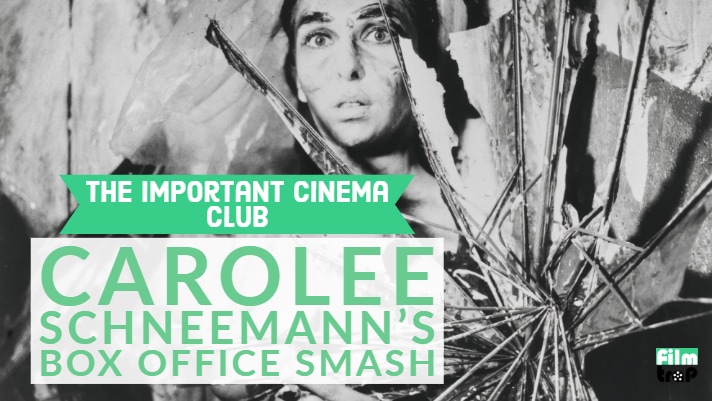 We discuss the career of director/painter/performance artist Carolee Schneemann and her short film work FUSES.

Become a Patreon subscriber for $5 a month and get an exclusive episode every week! This week on our Patreon we discuss Stanley Kubrick’s The Shining.

Self-shot. 16mm film. 18 min. A silent film of collaged and painted sequences of lovemaking between Schneemann and her then partner, composer James Tenney; observed by the cat, Kitch. “…I wanted to see if the experience of what I saw would have any correspondence to what I felt– the intimacy of the lovemaking… And I wanted to put into that materiality of film the energies of the body, so that the film itself dissolves and recombines and is transparent and dense– as one feels during lovemaking… It is different from any pornographic work that you’ve ever seen– that’s why people are still looking at it! And there’s no objectification or fetishization of the woman.” –Carolee Schneeman

Meat Joy embodies Schneemann’s concept of “kinetic theater,” in which performers engage in scored and improvised movements with a range of disparate materials. Eight performers— including Schneemann—covered in paint, paper, and paint brushes crawled and writhed together, playing with raw fish, meat, and poultry. According to the artist, by using the naked body as a material for art she “exposed and confronted a social range of current cultural taboos and repressive conventions.” To make this film, Schneemann combined footage from performances of Meat Joy in Paris and New York and set it to pop music, transforming a live work into a cinematic assemblage of twisting bodies with a soundtrack.