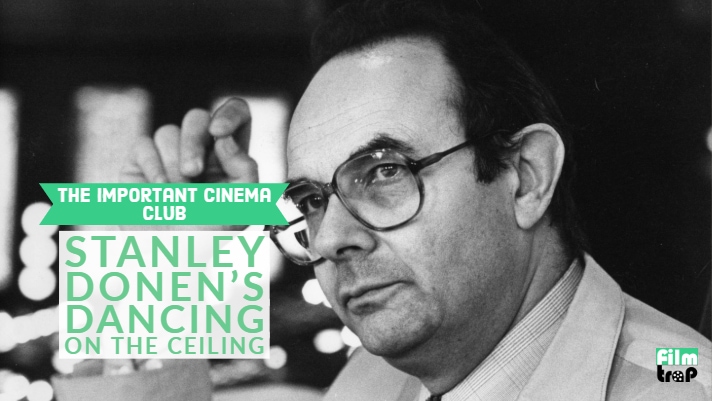 We discuss the career of Director/Choreographer Stanley Donen and his films Singin’ in the Rain, Bedazzled and Movie Movie.

This week on our Patreon we discuss the Sarah Jacobson and Mary Jane’s Not A Virgin Anymore. Become a Patreon subscriber for $5 a month to listen to the episode and our entire Patreon back catalogue.

When the transition is being made from silent films to `talkies’, everyone has trouble adapting. Don and Lina have been cast repeatedly as a romantic couple, but when their latest film is remade into a musical, only Don has the voice for the new singing part. After a lot of practise with a diction coach, Lina still sounds terrible, and Kathy, a bright young aspiring actress, is hired to record over her voice.

Stanley Moon (Dudley Moore) is a bumbling short-order cook, infatuated with Margaret (Eleanor Bron), the statuesque waitress he works with at Wimpy Burger in London. On the verge of suicide, he meets George Spiggott (Peter Cook), the devil, who, in return for his soul, grants him seven wishes to woo the challenging Margaret. Despite the wishes and the advice of the Seven Deadly Sins, including Lilian Lust (Raquel Welch), Stanley can’t seem to win his love and shake the meddling Spiggott.

This spoof of 1930s American films features two movies and a trailer, with the same cast members acting in all three. “Dynamite Hands” follows an up-and-coming boxer (Harry Hamlin) with a heart of gold who stumbles into a life of excess when he falls for a nightclub singer (Trish Van Devere) and meets a sleazy gangster (Eli Wallach). In “Baxter’s Beauties of 1933,” a Broadway producer (George C. Scott) learns that he is dying and attempts to create one last hit show.