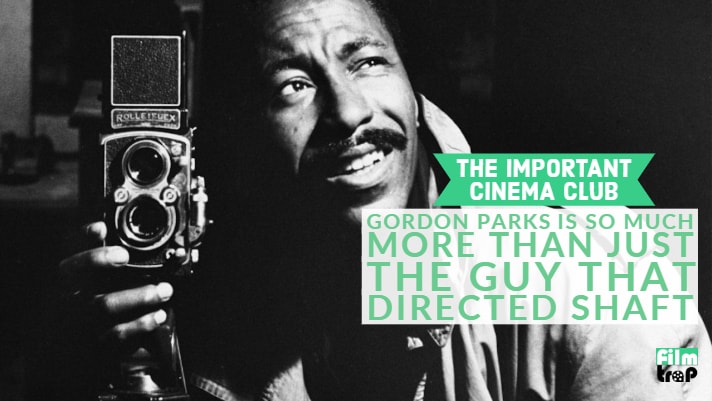 We discuss the directorial work of Gordon Parks, with an emphasis on The Learning Tree (1969) and Shaft (1971), and his incredible career as a photographer/musician/writer/renaissance man.

We have a PATREON! Join for five dollars a month and get a brand new exclusive episode of ICC every week. This week we discuss Straight to Video Canuxploitation Gold.

As an African-American teen in small-town Kansas in the 1920s, Newt Winger (Kyle Johnson) largely shrugs off the racial prejudice of his time and place. His calm and self-controlled perspective is in direct opposition to that of his quick-tempered friend, Marcus Savage (Alex Clarke). But when Marcus‘ father, Booker (Richard Ward), murders a man — and Newt witnesses the crime — Newt realizes that going to the police could jeopardize both his friendship and his life.

Shaft is a 1971 American blaxploitation action-crime film directed by Gordon Parks and written by Ernest Tidyman and John D. F. Black. The film revolves around a private detective named John Shaft who is hired by a Harlem mobster to rescue his daughter from the Italian mobsters who kidnapped her. The film stars Richard Roundtree as John Shaft, Moses Gunn as Bumpy Jonas, Charles Cioffi as Vic Androzzi, and Christopher St. Johnas Ben Buford. The major themes present in Shaft are the Black Power movement, race, masculinity, and sexuality. It was filmed within the New York City borough of Manhattan, specifically in Harlem, Greenwich Village, and Times Square.

Two New York policemen (Ron Leibman, David Selby) bust drug dealers their own way, on their own time. The Super Cops is a 1974 film directed by Gordon Parks and starring Ron Leibman and David Selby. The film is based on the book The Super Cops: The True Story of the Cops Called Batman and Robin by L. H. Whittemore. The film was released a few months after the successful cop movie Serpico (also based on a true story).