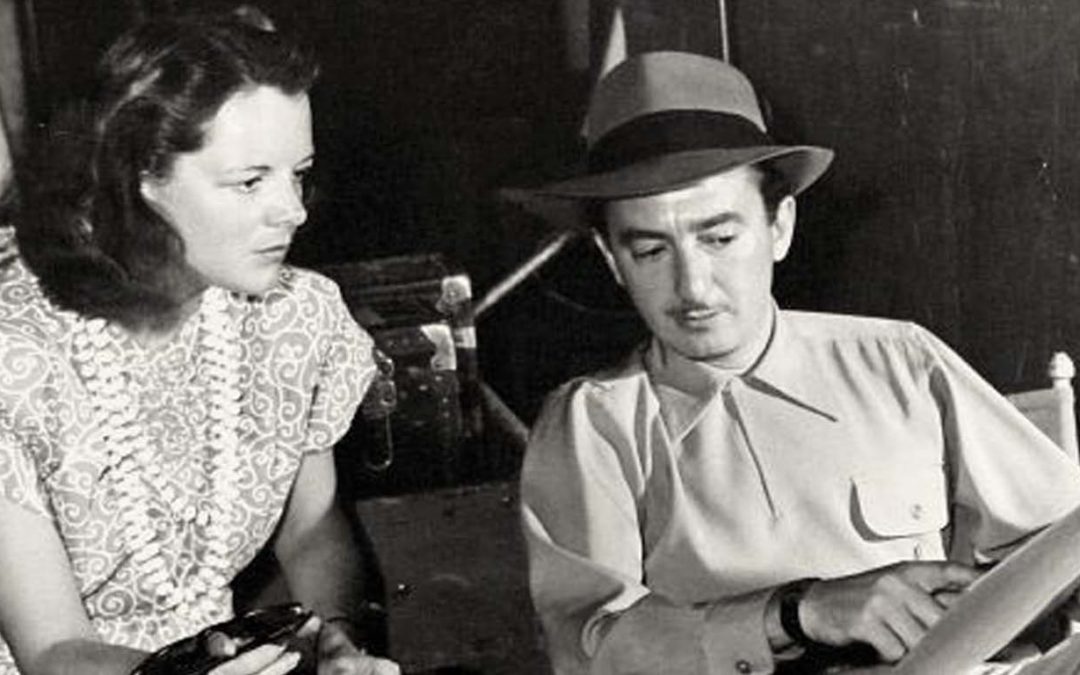 One of my favourite film resources is Bertrand Tavernier et Jean-Pierre Coursodon’s 50 YEARS OF AMERICA CINEMA (50 ans de cinéma américain) a critical two-volume encyclopedia that is mainly composed of lengthy essays on big, and very forgotten,  directors. Unfortunately, the book was written in French and has never been published in English.

I’ve recently given myself the mission of reading through the essays in alphabetical order and watching one movie from each mentioned director, and right from the get-go, I was surprised to discover they wrote at length about John H. Auer – A rarely discussed Poverty Row director who had the distinction of never making a Western (A Rarity!), but was incredibly visually stylish and obsessed with the scripts he was given. I’ve read very little about Auer on the world wide webs, so I decided to translate the article for the interested.

After four films shot in Mexico in one year, John H. Auer was financed by Herbert J. Yates for THE CRIMES OF DOCTOR CRESPI, a mediocre adaptation of Poe’s Premature Burial, shot in New York in ultra-flawed sets. It was one of the first films produced and distributed by Republic Studios (Stroheim, who starred in it, dubbed it “The Crime Of The Republic”), the studio in which Auer would spend most of his career.

Howard Reid dubbed him (in Films Index) the John Farrow of the Republic: “Like Farrow, he was interested in scriptwriting, camera movement, a passion for composition and editing issues. But where Farrow could exert directorial control over the actors, in particular, Auer was limited by the poverty of the budgets and the speed of the shootings. It is true that this Hungarian arrived in the United States in 1929,  began by being an assistant before directing foreign language versions for Universal, occupied a place a little apart at Republic. First, he produced a large number of his films and above all, because he sometimes devoted himself to visual research: length of shots, fairly frequent use of wide-angle, editing that moved from travelling shot to travelling shot. These effects of staging – we have seen too few films of his films to know if we can speak of an auteurist style – are perfectly suited to the narrative which seemed to favour Yates: this mixture of cheap romanticism, extravagant properties, pulpy lyricism which the adapted to film noir or melodrama. It treated feelings and verisimilitude with the same lack of realism as did the serial format, of which Republic was the champion. Hence the strange and sometimes charming tone of several of his films, and it is, therefore, possible that D’auer’s career holds some surprises. Especially since the absence of stars left the directors free to experiment with a photographic style and since this studio had remarkable (and very underestimated) special effect specialists: Howard and Theodore Lydecker, whose work on the models and the transparencies are awe-inspiring, given the meagre resources at their disposal.

Visually, D’auer’s most interesting films are those photographed by the remarkable Jack Marta and especially by John Alton (among D’alton’s favourite films is a Mexican production by Auer): the overture to THE DEVIL PAYS OFF, this bizarre detective spy, where the atmosphere takes precedence over the action, of which several shots are composed with an astonishing sense of dramatic economy. The screenplay was by Lawrence Kimble, who would collaborate several times with Auer, from a story by George Worthing Yates and Julian Zimet, the future author of Ulmer’s THE NAKED DAWN, two progressive screenwriters. Among the cast is J. Edward Bromberg, a remarkable comedian, victim of McCarthyist persecution.

It’s hard to guess what other interesting titles might be. We can nevertheless express certain fears about more or less musical comedies, and share the reservations of Merigeau and Bourgoin about GANGWAY FOR TOMORROW, a patriotic scenario by Arche Oboler, retracing the lives of several workers in an armament factory during the war, which was not saved by a very good cast (Ryan, Carradine, Margo) WOMEN IN WAR, which seems just as dated and conventional, was nevertheless the first American film to evoke the air raids on London. During a hiatus of a few years at RKO, Auer starred in addition to GANGWAY FOR TOMORROW, four low-budget musicals, all written by Lawrence Kimble, and mostly starring Philip Terry. PAN AMERICANA is a musical travelogue that tours Mexico, Cuba and Brazil, and features commentary by Robert Benchley (the film, according to the authors of THE RKO STORY, is “frenzied, synthetic and mediocre”) At the end of BEAT THE BAND, Gene Krupa’s orchestra “heated things up” literally in the steam of the boilers of a hotel. Quan at SEVEN DAYS ASHORE, the subject was Jacques Deval, and you could hear songs like Siou City Sue and Ready, Aim, Kiss.

Like all directors working for Republic, Auer had to direct the ineffable Vera Ralston in melodramas like THE FLAME and the unpromising I, JANE DOE as well as John Wayne in the innocuous but visible WHEEL OF FORTUNE. JOHNNY TROUBLE, the last of Ethel Barrymore is, according to Merigneau and Bourgoin, much more moving. They even cite it in the real successes of D’Auer, of which it is the ultimate achievement, while John Howard Reid has a weakness for THE AVENGERS.

His most famous film, notably by the critics of the surrealist magazine l’Age du cinema, remains ANGEL ON THE AMAZON, a bewildering story of a woman condemned to eternal youth following the attack of a black panther and who kills these beasts in the hope of avenging her fate. The exacerbated romanticism of the subject (further increased by the fact that the interpreter is the wife of the boss of the studio, which gives a little CITIZEN KANE side to the proceedings…), where we go from the Amazon jungle to Rio and Pasadena, especially inspires Auer in the first part: the tracking shots in the jungle, the evocation of the headhunters that we will never see, cropping that connects the actors and the panther who watches them in a single shot. Unfortunately, the acting leaves a lot to be desired The fault lies less with Ralston, which is a shame than with Brian Aherne and especially George Bernet, worse and worse, more and more ridiculous as the course unfolds. The last scenes are further softened by the very average photography of Reggie Lanning, which badly illuminates the transparencies, the faces of the actors, and deprives certain framings of atmosphere, as well as by a scenario which is really ridiculous. We dream of a more rigorous treatment of this theme while telling ourselves that the “important” directors would all have refused it and that the charm of the film also results from this absence of pretension, of dramaturgical letting go.

THE CITY THAT NEVER SLEEPS is a film noir that contains excellent and very original moments: the relationship between a murderer and an actor who plays the model in a shop window and who has witnessed the crime, others are more classic but very well filmed, like a burglary in a huge deserted building where two police officers are patrolling. The staging shows great fluidity in the juxtaposition of several parallel plots, in the description of the relationships between the characters, the most successful of which is this criminal magician played by William Tallman. Another curious mix of concept and ambition, with some very successful night shots of Chicago, good use of natural settings (one of D’auer’s concerns, who felt stuck in the studio sets of ANGEL ON THE AMAZON) although some places would have been helped by being more lived in (the music hall where Mala Powers performs, for example). Unusual detail: Steve Fisher’s scenario uses the off commentary, as is common in this kind of film, but here it’s “The City” of the title that speaks in the first person.

AVAILABILITY: THE CRIMES OF DR. CRESPI has recently been remastered and made available by Flicker Alley on their Blu-ray release SHADOW OF HOLLYWOOD – and I think they underestimate the visual inventiveness of the film in this article.

THE CITY THAT NEVER SLEEPS, THE ETERNAL SEA, A MAN BETRAYED, SOS TIDAL WAVE, and HELL’S HALF ACRE were released on Blu-ray by Olive Films.

I JANE DOE was recently released by Kino Films.

ANGEL ON THE AMAZON has popped up on Amazon Prime in decent quality, but many other Auer titles, like THE DEVIL PAYS OFF, only exist in VHS versions floating around on the internet.